Spectroscopy is the branch of Science which deals with the techniques used to observe molecules. By using the physical properties of molecules and their structures, we can obtain information that indicates the precise form of the molecule. This data can also indicate the properties the substance has, such as electrical conductivity or systems of conjugated orbitals. Please note – these pages are based on the University of Liverpool’s CHEM170 – Introductory Spectroscopy module. They are not intended to be a comprehensive guide to spectroscopy, but rather a useful tool to help with the understanding of the basics of spectroscopy. Also – these pages are NOT intended to be used instead of attending lectures. They are simply an extra guide for students to use in their own time when studying.

The universal aspect of all spectroscopic techniques is that they rely on the interactions between electrons and photons. The absorption of a photon’s energy by an electron, and the emission of photons by electrons as a molecule relaxes, allow us to determine important information about the electronic structure of a molecule. This is the key to calculating a wide variety of properties of the molecule.

In general, we can often look at two types of spectrum – absorption or emission. In an absorption spectrum, a molecule is bombarded with photons from a controlled source. Electrons within the molecule may be able to absorb discrete amounts of energy and make the transition from one energy level to another. If the molecule has been bombarded with photons whose range of energies is continuous, then photons, arriving at a detector, which have passed through the molecule would have all their original energies except those which had been absorbed by electrons in the molecule. The absorption spectrum would contain gaps corresponding to the energies of the absorbed photons, given by the equation E = hν – the energies required to induce electronic transitions.

The principle of the absorption spectrum: 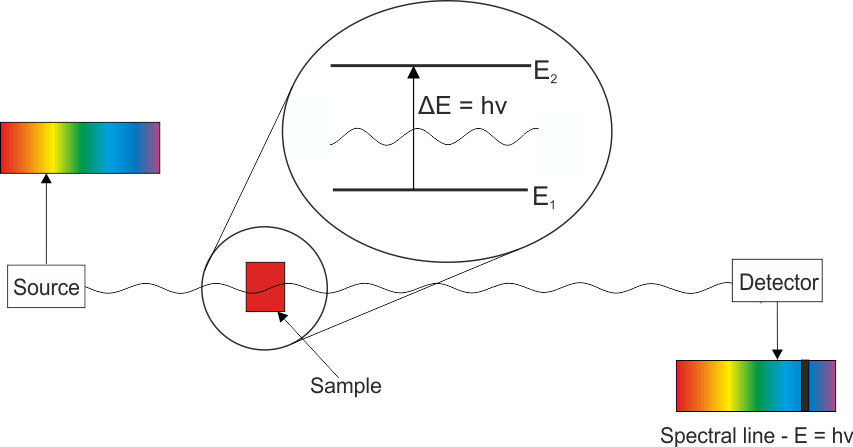 The counterpart to an absorption spectrum is an emission spectrum. The basic physical principle is the same – the transition of an electron from one energy level to another. However, in this case, the electron begins in the higher energy level – the “excited state”. Typically, the molecule has been excited by some non-electromagnetic process, such as heating. Following the excitation, the electrons in the excited states return to their original, most stable states – the “ground state”. This loss of energy can occur in a number of ways, but a very common way is by radiative emission of a photon. The energy of the photon, again given by the equation E = hν, is equal to the energy gap between the excited state and the ground state.

The principle of the emission spectrum: 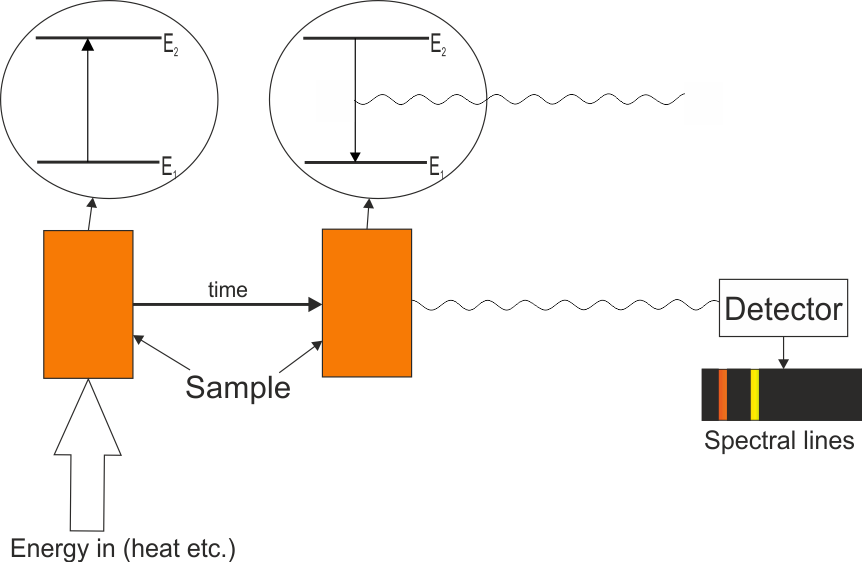 Energies of absorption or transmission are often expressed in a number of different, analogous forms. They may be expressed as energy (E, in J or eV), frequency (v, in Hz, s-1), wavelength (λ, often in nm or Å) or wavenumber (ṽ, typically in cm-1).

A more extensive list of commonly used units in physical chemistry is available.