The first step of Framework Model is the rapid formation of native secondary structural elements, such as beta sheets and alpha helices. The example (PDB ID: 1CRN) above, calculated using the Yale Morph Server and Spartan08 Fixer to produce viable pdb files, shows only one intermediate but there can be several intermediates. The second step is relatively slow and is the formation of tertiary structure by diffusion and collision and also, if there is more than one stand in the protein, the quaternary structure forms.

Click the diagram below to visualize the whole process of folding. 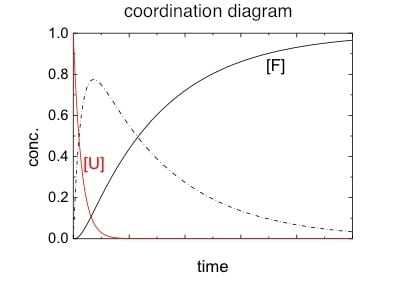